You couldn’t make it up. The year was 1750 in London at England’s top criminal court – the Old Bailey. Three judges were trying a group of prisoners they were fully anticipating to sentence to death. Capital punishment applied to a whole range of crimes at this time – not just murder but also theft and violent attack.

Unfortunately for the judges, they were seated right in front of the dock – so that they could get a good look at the prisoners. What they didn’t realise was that within Newgate prison, there had been an outbreak of jail fever.

The agent of transmission is the humble louse, which gets infected by a sick person and then shares the disease with anybody nearby. So, the judges were infected because of their proximity to the accused. And it’s not a disease that spares the rich and privileged.

For example, one of the judges was Sir Samuel Pennant – who was the Lord Mayor of London. The other two judges were Sir Thomas Abney and Baron Clarke. And they all died – infected by the very prisoners they had been sentencing to hang.

Today, the Old Bailey – or Central Criminal Court – is still standing, though a more recent building. There’s no prison nearby. But in 1750, Newgate prison was located right next door. Prisoners were brought a relatively short distance from the squalid and overcrowded conditions at Newgate, straight into the courtroom of the Old Bailey.

Therefore, if typhus was raging through Newgate, it was brought direct into the courtroom. Not that anybody fully understood the risk. And certainly not the esteemed judges who were carried off to meet their maker.

If you enjoyed the BBC series Taboo – you’re probably wondering what London was really like at that time.

That violent drama is set in 1814, the late Georgian period, and as luck would have it, I own several guides to London from the first two decades of the nineteenth century. One from 1804 is especially descriptive and I’ll quote liberally below.

These books were intended to guide a visitor around the city taking in places of interest, like a prison for example or a mental asylum. Yep, you really could pay to go and gawp at criminals and the insane. So – here’s a selection of oddities from the period of Taboo.

By the end of the nineteenth century, if you committed a murder north of the Thames – you would face the hangman at Newgate. If you committed it south of the river, then you breathed your last at Wandsworth.

The photo here is of the passage from the jail to the former Old Bailey court house, which was also a graveyard of sorts. Those hanged were placed under the flagstones! Lime was enclosed in the coffins to rot the bodies quicker. And their only marker was an initial carved into the walls, which you can see.

This passageway disappeared when Newgate was finally taken down.

George Cruikshank was a caricaturist who drew the illustrations for the books of Charles Dickens. He was also vehemently opposed to the death penalty, following something he saw outside Newgate prison. Cruikshank lived in Dorset Street, Salisbury Square and one day had to visit a house near the Bank of England. As he passed Newgate, he gazed upwards to be met with the grisly sight of several bodies still hanging from the gallows – two of them women. It turned out they had been executed for forging one pound notes. 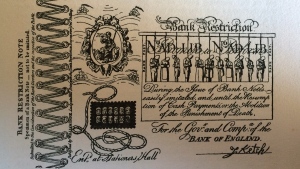 All of which gave Cruikshank an idea. As he wrote: “After witnessing this tragic scene I went home and in ten minutes designed and made a sketch of this”. He created his own bank note – not forged of course – but depicting the awful scene on what looked like a bank note. And of course this referenced the crime of the condemned. A perfect meeting of medium and message!

Hard to believe but this little act of protest created a sensation and Cruikshank’s house was mobbed by supporters. The Bank of England reacted by stopping the issuance of one pound notes while Sir Robert Peel moved new legislation to outlaw hanging for forgery.

Kennington and the surrounding area has a big LGBT population these days but being gay in 1743 could have landed you in terminal trouble. In fact, the sorry scene that unfolded in August of that year reminded me of the hangings of gay people we see in Iran these days. But this was London – and barely 250 years ago.

James Hunt and Thomas Collins were accused of the crime of “sodomy”. The two men were from the parish of Saint Saviour’s in Southwark and had committed an act “not fit to be named among Christians” in June.

Both denied the charge. Hunt was 37 and Collins was 57, so both mature, grown men. Not that their age made the slightest bit of difference in an eighteenth century courthouse.

Hunt was born in Rotherhithe, reasonably well educated, apprenticed to be a barge builder when young, raised as an Anabaptist but deemed to be a bit bolshy.

While in prison, he was preached at by an Anglican vicar who reminded him that his soul was in danger of eternal torment. Hunt responded that it was those who had brought the false charges against him who had truly sinned. With the prospect of being hanged in public, it’s not surprising that Hunt continuously denied being gay. Who wouldn’t?

Collins was from Bedfordshire and had served in the army, been married and a father to several children. His wife was from Southwark. Coming back to London, having been away, he was walking across London Bridge on his way to see his granddaughter.

As he turned into Pepper Alley, he saw Hunt walking in front of him. Collins asked Hunt if there was a “necessary house” nearby – for which read, public toilet. They both went in together but then two other men entered and Collins claimed they set about mugging them but found no valuables to take. Or as Collins put it – here is no feathers to pluck.

Unfortunately, the account given by Hunt put himself in the privy before Collins so their accounts clashed a bit on detail. Enough to result in a death sentence by the court. Hunt had given his version of events to the aforementioned Anglican vicar who then passed on the damning testimony. Unsurprisingly, when the time of execution arrived, Hunt was in no mood to pray with the man of the cloth who had brought him and Collins to the gibbet.

Hunt said he was glad to be rid of this life. And he and Collins both died together. They were strung up to a tree, then the cart that had brought them drove away from under their feet. After half an hour they were cut down. Collins’ body was taken for dissection – a common practice in those days – but he was returned as his body revealed signs of venereal disease.

On the 8th September, 1747, Richard Henson and Edward Wood saw a linen sheet hung out to dry on a washing line in the parish of Hampstead.

In those days, Hampstead was a village a few miles out of London – today it’s been swallowed up into the great urban sprawl of north London. The two thieves took the sheet and went to a pawnbroker. The sheet was still wet and he refused to take it.

So they went on to a baker and got a couple of rolls in exchange for it. They didn’t have long to satisfy their hunger being apprehended and dragged before a judge for sentencing. Sarah Johnson got her sheet back and Henson was sentenced to be whipped.

It’s not certain how old Henson was – but Wood, whose punishment I’ve not been able to find, was ten or eleven years old. Rough justice!